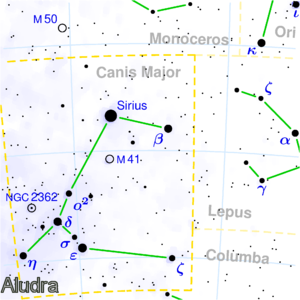 Aludra (Eta Canis Majoris) is a supergiant B star and the fifth brightest star in the constellation Canis Major. Its name refers to an Arabic group called "the Virgins," which consists of the stars of the Great Dog's lower portions. Some of the Virgins, including Aludra and Wezen, are in a loose stellar association known as Collinder 121.

Formed only about 12 million years ago, Aludra is already in old age, blowing a strong stellar wind from its surface at a speed of some 500 km/s. The material it has lost – about one-third of a solar mass – has gathered into a cloud that is detectable by its infrared emission. A seventh magnitude white star about 2' from Aludra, easily visible in a small telescope, is not a physical companion but lies a mere 600 light-years from the Sun – about five times closer than Aludra itself.