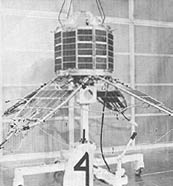 Ariel was a series of six British satellites launched by NASA. The first four were devoted to studying the ionosphere, the remaining two to X-ray astronomy and cosmic-ray studies. Ariel 1 was the first international satellite. It was named in Feb 1962 for the spirit of the air who was released by Prospero in Shakespeare's play The Tempest. The name "Ariel" – a traditional one in British aeronautics – was chosen by the UK Ministry of Science and endorsed by NASA.

Ariel 1 (UK-1 before orbit) was built by NASA's Goddard Space Flight Center and instrumented with six British experiments to make integrated measurements in the ionosphere. Ariel 2, contained three UK-built experiments and was placed in orbit two years later. Ariel 3, designed and built in the United Kingdom, carried five experiments. The UK-built Ariel 4 carried four UK and one US experiment to investigate plasma, charged particles, and electromagnetic waves in the ionosphere.

Ariel 5 was one of the earliest X-ray astronomy satellites and involved a British-American collaboration. The Science Research Council managed the project for the UK and the Goddard Space Flight Center for the US. Several catalogs of X-rays sources stemmed from its observations which continued until the spring of 1980.