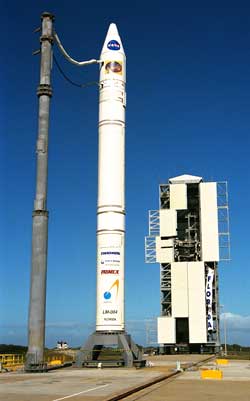 The Athena 2 rocket sits on the pad at Cape Canaveral prior to launching the Lunar Prospector spacecraft to the Moon in 1998.

The Athenas are a family of solid-propellant launch vehicles built by Lockheed-Martin for delivering small payloads into low Earth orbit, geostationary transfer orbit (GTO), or interplanetary orbits. After a string of seven commercial launch successes the prospects for Athena I are uncertain with the shrinkage in the market for small commercial satellite launches. However, the future for Athena 2, brightened in 2001 when NASA added the rocket to its launch services contract along with the Delta and the Atlas.

The Athena program was begun in Jan 1993 by Lockheed to apply its expertise in solid-propellant missile technology, developed as a result of the Polaris, Poseidon, and Trident programs, to launching lightweight payloads into space. What was initially called the Lockheed Launch Vehicle (LLV) became the Lockheed Martin Launch Vehicle (LMLV) following Lockheed's merger with Martin Marietta to form Lockheed Martin. The core launch vehicle was named LMLV-1, with a larger version named LMLV-2. Later, LMLV-1 was renamed Athena 1, while LMLV-2 became the Athena 2. A third version, Athena 3, has also been introduced.

The first launch of an Athena rocket took place in August 1995 and ended in failure. But more recently Athena 1 and Athena 2 vehicles have been used to launch NASA's Lewis and Lunar Prospector missions, ROCSAT-1 for the People's Republic of China, and four small satellites in a single launch from Kodiak Launch Complex – a first for the new Alaskan rocket site.

The Athena launch system integrates several different solid motor stages and common equipment to create the three-stage Athena 1 and 2. Common to the two vehicles are the avionics package, separation system, destruct system, and launch equipment. The Athena 1 has a first stage with a Thiokol Castor 120 solid motor first stage, a second stage with a Pratt & Whitney Orbus 21D solid motor, and a hydrazine-fueled Primex Technologies Orbit Adjust Module (OAM). The Athena 2 uses the same stack but adds another stage with a Castor 120.