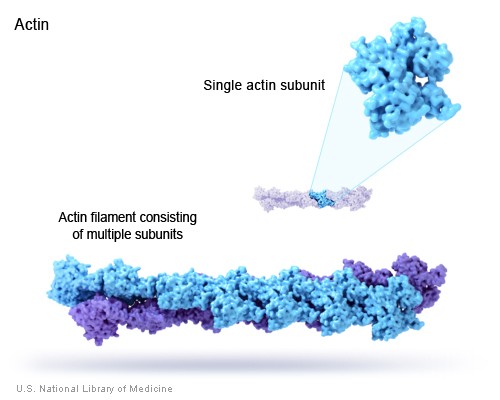 Actin is one of two proteins involved in muscle contraction. It assembles into long polymer rods called microfilaments which interact with the other muscle protein, myosin, to cause shortening (contraction) in muscle cells. Actin also serves as an important structural molecule for the cytoskeletons of many eukaryotic cells.

Actin is a globular protein abundantly present in many cells, especially muscle cells, that significantly contributes to the cell's structure and motility.

Actin monomers can very quickly assemble into long polymer rods called actin filaments or microfilaments. These microfilaments, like the other two components of the cellular cytoskeleton, form a three-dimensional network inside a eukaryotic cell. Microfilaments also interact with myosin to permit movement of the cell, and they pinch the cell into two during cell division.

In muscle contraction, filaments of actin and myosin alternately unlink and chemically link in a sliding action.

Actin is the most abundant protein in typical eukaryotic cells, accounting for as much as 15% of total protein. It is a highly conserved protein: the amino-acid sequence of actin from Acanthamoeba, a small soil amoeba, is 95% identical to vertebrate isoforms of actin.

X-ray crystallography has revealed that the actin monomer is approximately pear shaped, and when viewed conventionally with the more pointed end upper most, both the NH2 and the COOH termini are seen in the bottom right hand corner. Actin is composed of four domains with a large cleft almost bisecting the molecule. This cleft forms both a divalent cation (most likely magnesium in cells) and nucleotide binding site. Because the actin subunit has polarity, the microfilaments built up from these subunits displays polarity too.