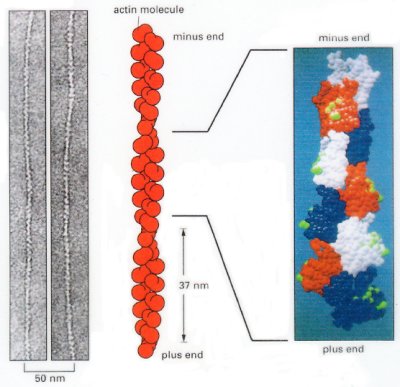 A microfilament is a linear assemblage of the protein actin. Microfilaments, also called actin filaments, are one of three main components of the cytoskeleton.

Microfilaments serve a number of functions. They:

• form a band just beneath the cell membrane that
- provides mechanical strength to the cell
- links transmembrane proteins (e.g., cell surface receptors) to cytoplasmic proteins
- anchors the centrosomes at opposite poles of the cell during mitosis
- pinches dividing animal cells apart during cytokinesis;
• generate cytoplasmic streaming in some cells;
• generate locomotion in cells such as some leukocytes (white blood cells) and the amoeba;
• interact with myosin ("thick") filaments in skeletal muscle fibers to provide the force of muscular contraction.

The microfilament is a single-stranded helix with each monomer rotated 166° with respect to neighboring subunits; this means that every 36 nanometers, or every 13 subunits, subunits eclipse each other at what appears to be a crossover.

Because actin subunits have polarity, so also do the microfilaments from which they are built. Traditionally, the ends of a microfilament have been referred to as 'pointed' and 'barbed,' a nomenclature that arises from the resemblance of microfilaments decorated with fragments of myosin II to arrowheads in the electron microscope.