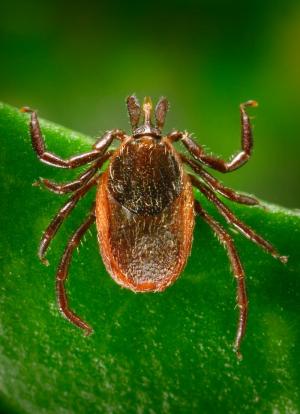 Anaplasmosis is transmitted to humans by tick bites primarily from the blacklegged tick (Ixodes scapularis) in the eastern United States and the western blacklegged tick (Ixodes pacificus) in the western United States. Of the four distinct phases in the tick life-cycle (egg, larvae, nymph, adult), nymphal and adult ticks are most frequently associated with transmission of anaplasmosis to humans. The disease also occurs in temperate regions outside of the United States. In these areas, Ixodes ricinus and Ixodes persulcatus serve as primary vectors.

In the United States, blacklegged ticks infected with A. phagocytophilum have been reported in New England, the Midwest, and southeastern states while western blacklegged ticks infected with A. phagocytophilum have been found along the pacific coast and in some southwestern states. Most human cases of anaplasmosis occur where the infected ticks are present. Occasionally someone who does not live in a tick-endemic area will become ill with anaplasmosis, possibly having been bitten by an infected tick during travel. If you traveled during the 3 weeks prior to becoming ill, you should tell your doctor.

About 600–800 cases of anaplasmosis are reported to CDC each year. States reporting the highest incidence of anaplasmosis in 2006 were Minnesota, Wisconsin, New York, New Jersey, and Connecticut.

The majority of people with anaplasmosis experience headaches, fever, chills, and muscle aches that can be confused with common diseases such as influenza. Onset of anaplasmosis generally begins within 3 weeks (5–21 days) of a tick bite. The symptoms tend to be most severe in aged and immunosuppressed people. Some individuals who become infected with A. phagocytophilum do not become ill or experience only very mild symptoms and do not seek medical treatment.

Accurate diagnosis of anaplasmosis is often difficult because of the non-specific nature of the symptoms. An initial diagnosis is based on the patient's symptoms and a possible history of tick exposure. The diagnosis can only be confirmed by use of laboratory tests. Your doctor will take a blood sample to test for low white blood cell count, low platelet count, elevated levels of specific liver enzymes, the presence of specific antibodies produced by your body in response to infection with A. phagocytophilum, and/or use polymerase chain reaction (PCR) to detect the presence of A. phagocytophilum.

The recommended treatment of anaplasmosis for children and adults is a tetracycline antibiotic, typically doxycycline. Prescribed antibiotics are usually taken for 10–14 days.


Can a person get anaplasmosis more than once?

Very little is known about immunity following an anaplasmosis infection. While it has been thought that infection may result in long-term immunity, there have been rare reports of laboratory-confirmed reinfection. Thus, even if you have previously been diagnosed with anaplasmosis, it is still necessary to be vigilant about avoiding tick bites and other tick-borne pathogens.