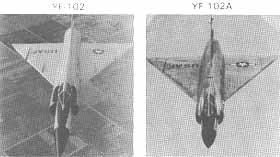 These photos show the narrowing of the YF-102A fuselage near the wings as dictated by the area rule compared to the fuselage of the YF-102. It enabled the aircraft to become supersonic. Credit: NASA.

The area rule is a rule in aircraft design discovered by NASA aerodynamicist Richard Whitcomb in 1950. It states that, in order to produce the least amount of drag when approaching supersonic flight, the cross-sectional area of an aircraft body should be consistent throughout the aircraft's length. To compensate for the place on an aircraft where the wings are attached to the fuselage, the fuselage needs to be made narrower so that the cross-section remains the same. This is why aircraft that are designed to fly around the speed of sound have a pinched fuselage where the wings are attached to the body.