How a prism astrolabe works. (1) Before the star reaches 60° altitude, two images are seen through the telescope section of the instrument. (2) At the correct altitude a ray of starlight reflected off the mercury surface and into the prism forms a coincident image with that of the other ray, which is reflected from the lower face of the prism. The mercury was used because a liquid surface defines a horizontal plane. Only one image can therefore be seen. (3) When the star's altitude is too great, and has therefore passed beyond the 60° limit, two images are seen again. 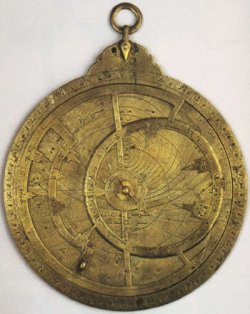 An astrolabe is an Arabic and medieval European sighting instrument on an altazimuth mounting, used to show the appearance of the celestial sphere at a given moment and to determine the elevation above the horizon of celestial objects. It comprises two or more flat, metal, calibrated disks, one with a star map and one or more others with a scale of angles around its rim, attached so that both or all can rotate independently; the modern equivalent is the planisphere. For early navigators and astronomers it served as star chart, compass, clock, and calendar. As a navigational device it was eventually replaced by the sextant.

The Danjon astrolabe is a type of portable solstitial armillary, modified for stellar observation. Suspended by a small hook or eye, the instrument consisted initially of a single ring that hung in a vertical plane. Pivoted at the center of the ring was a rod equal in length to the ring diameter, carrying sights at either end. When aligned on a star or planet, an angular scale inscribed on the armillary ring showed the object's altitude.

The prism astrolabe (see below) was used in conjunction with a chronometer to measure the exact moment at which a star passes through a set altitude above the horizon (60°). This information is useful in fixing one's position on the Earth's surface. Essentially, the prism astrolabe was a highly accurate sighting device.