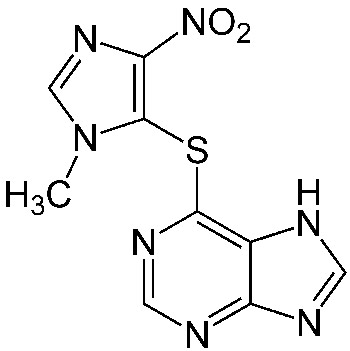 Azathioprine is an immunosuppressant drug used to prevention organ rejection after transplant surgery and in the treatment of severe rheumatoid arthritis and other autoimmune diseases. In the latter case, Azathioprine (brand name Azasan®) is prescribed when other treatments, such as corticosteroids and other antirheumatic drugs, fail to slow the progress of the disease or to improve symptoms. Treatment depends on the specific disease process, but often includes drugs such as cortisone which damp down the immune response.

Azathioprine reduces the efficiency of the body's immune system by preventing lymphocytes (a type of white blood cell) from multiplying. Lymphocytes destroy foreign proteins and, in autoimmune disorders, attack body proteins that the immune system considers to be foreign.

Azathioprine comes as a tablet to take by mouth. It is usually taken once or twice a day after meals. The directions on the prescription label should be followed carefully and the drug taken exactly as directed.

Azathioprine controls rheumatoid arthritis but does not cure it. It may take some time before the patient feels the full benefit of the drug. Azathioprine prevents transplant rejection only as long as the patient is taking the medication.

Azathioprine is also used to treat ulcerative colitis (a condition in which sores develop in the intestine causing pain and diarrhea).

Azathioprine may cause side effects. The patient's doctor should be informed if any of these symptoms are severe or do not go away: upset stomach, vomiting, diarrhea, or muscle aches. Some side effects can be serious. The following symptoms are uncommon, but if the patient's doctor should be told immediately: mouth sores, cough, lack of energy, loss of appetite, pain in the upper right part of the stomach, yellowing of the skin or eyes, flu-like symptoms, rash, blurred vision, or stomach pain.