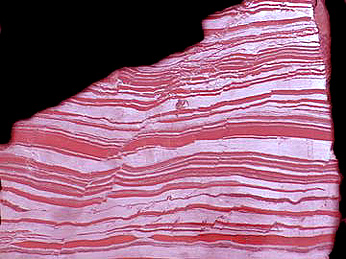 A banded iron formation (BIF) is a type of sedimentary rock consisting of alternating layers of iron-rich and iron-poor rocks. Most deposits of this type were laid down about 2.5 billion years ago at a time when Earth's atmosphere still consisted mainly of nitrogen and carbon dioxide. Oxygen given off as a waste product by early photosynthetic bacteria immediately bonded with the abundant dissolved iron to yield minerals like magnetite and hematite. Banded iron formations occur worldwide and give rich iron ore deposits in parts of Minnesota and Michigan.