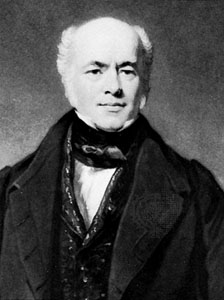 Francis Baily was an English astronomer who described the striking optical effect that became known as Baily's beads during an annular eclipse of the Sun on May 15, 1836. An arc of bright spots is briefly seen during an eclipse of the Sun, immediately before and after totality, an effect caused by light shining through the Moon's irregular surface features.

Baily retired in 1825 after a successful career as an eminent London stockbroker to turn his interest in astronomy from spare time to full time. He repeated the experiments of Henry Cavendish to determine the density of the Earth, and measured its elliptical shape. Outraged by inaccuracies in the British Nautical Almanac (tables at sea to determine longitude for navigation), he took on the exacting and tedious work of revising them. At the same time, it was necessary to revise several star catalogs to correct errors.