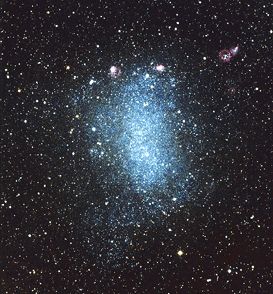 Barnard's Galaxy is a dwarf irregular galaxy about 1.6 million light-years away and has perhaps one-tenth our galaxy's size. Catalogued in the New General Catalogue as NGC 6822, it lies in the constellation Sagittarius and is a member of the Local Group.

In the 1920s, Edwin Hubble found three star clusters in Barnard's Galaxy that he believed were all very old objects similar to globular clusters in the Milky Way Galaxy. However, images taken by the Hubble Space Telescope have shown that the three clusters are of completely different ages. The stars in the cluster called Hubble VII were formed about 15 billion years ago and are about the same age as our own galaxy and the Universe itself. A second cluster known as Hubble VIII contains stars about 1.8 billion years old, while a third cluster, Hubble VI, has stars that are as young as 100 million years. It seems that whereas our galaxy formed most of its big clusters in the first couple of billion years after the Big Bang, Barnard's Galaxy has been generating new massive star clusters all along. The largest currently active star formation region in NGC 6822 is Hubble X. The nearly circular bright cloud at the core of Hubble-X measures about 110 light-years across and contains a central cluster, less than 4 million years old, of many thousands of young stars, the brightest of which can be seen in the Hubble image as numerous bright white dots. To give some idea of the scale of Hubble-X, the tiny cloud barely visible just below it is roughly about the same size and brightness as the Orion Nebula.