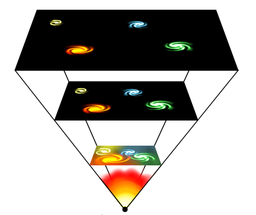 A Big Crunch is the endpoint of a closed universe (see cosmological model). If the Universe contains enough mass to halt the overall cosmic expansion and reverse it, all the matter contained within the Universe will eventually be drawn together by the force of its mutual gravitational attraction. This collapse will cause the matter to be concentrated in an ever decreasing volume with densities and temperatures reaching those last seen in the Big Bang. In one scenario, since a Big Crunch would match the conditions of the Big Bang, it could mark the start of a new phase of expansion and the Universe would begin again. This concept is known as the oscillating universe. A specific form of the Big Crunch was proposed by a number of scientists, including Andrei Linde of Stanford University. following the discovery of dark energy.