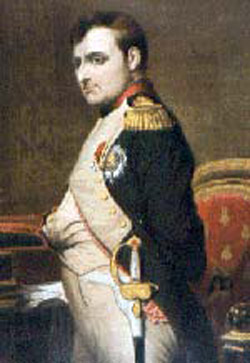 The advancement and perfection of mathematics are intimately connected with the prosperity of the state.
– Napoleon

Napoleon Bonaparte was the Emperor of France and a very good amateur mathematician having excelled in this subject as a student at school and at military college. Even after becoming First Consul he was proud of his membership in the Institute de France (the nation's leading scientific society), and was close friends with several mathematicians and scientists, including Joseph Fourier, Gaspard Monge, Pierre Simon Laplace, Chaptal, and Berthollet. Indeed, in his grand expedition to Egypt in 1798 Napoleon brought along (in addition to 35,000 troops) over 150 experts in various fields, among them Monge, Fourier, and Berthollet, not to mention a complete encyclopedie vivante with libraries and instruments. One result of the expedition was that Fourier served for a time as the governor of lower Egypt. Likewise Laplace (who interviewed the young Napoleon for admission to the artillery) received titles and high office as a result of his friendship with Bonaparte. However, Laplace was relieved of his duties as the Minister of the Interior after only six weeks, and Napoleon later commented that Laplace had "sought subtleties everywhere, had only doubtful ideas, and carried the spirit of the infinitely small into administration". The most famous exchange between these two men occurred after Laplace had given Napoleon a copy of his great work, Mecanique Celeste. Napoleon looked it over, and remarked that in this massive volume about the universe there was not a single mention of God. Laplace replied "Sire, I had no need of that hypothesis." Regarding the idea that Napoleon might have discovered what is now called Napoleon's theorem (if equilateral triangles are constructed on the sides of any triangle (all outward or all inward), the centers of these equilateral triangles themselves form an equilateral triangle), Coxeter and Greitzer have said that