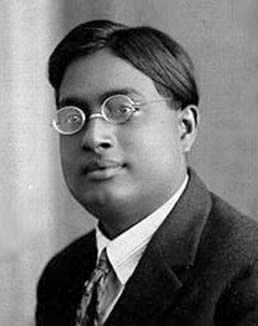 Satyendra Bose was an Indian physicist and mathematician who contributed significantly to the theories of quantum mechanics and statistical mechanics. Bose made the initial advances to describe the statistical properties of certain elementary particles, now called bosons. These particles, which include all those that mediate forces (such as the photon, which carries the electromagnetic force), have the property that any number of them can occupy the same quantum state: that is, they do not obey the Pauli exclusion principle. Bose's work was further developed by Albert Einstein, with whom Bose collaborated, and the statistics that such particles obey is now called Bose-Einstein statistics.

Bose also worked on X-ray diffraction, electrical properties of the ionosphere, and thermoluminescence. Having begun his research career at the University College of Science in Calcutta he was appointed a Reader in physics at the University of Dacca in 1921 and taught there until 1945, being a professor and head of physics from 1927. In 1945 he returned to Calcutta University, when he was appointed as Guprasad Sing Professor of Physics, a position he held until he retired in 1956 when he was made Professor Emeritus.