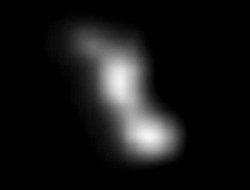 9969 Braille is a small asteroid (2.2 × 1 km), discovered in 1992 by American astronomers Eleanor Helin and Kenneth Lawrence; it was formerly known as 1992 KD and renamed in honor of Louis Braille. NASA's Deep Space 1 probe flew past it, on July 29, 1999, at a distance of 26 km. The spacecraft's infrared sensor confirmed that Braille is similar in composition to Vesta, a rare type of asteroid and one of the largest bodies in the main asteroid belt. It remains uncertain whether Braille is a piece that broke off Vesta, or whether the two asteroids both came from a larger body that was destroyed long ago.

Braille rotates only once in 9 days, and has an orbit greatly tilted relative to the ecliptic plane of the planets. In about 4,000 years, it is estimated, Braille will join the hundreds of other asteroids that drift in and out of Earth's orbit.