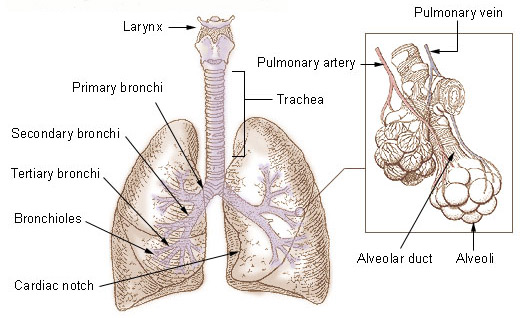 General structure of the bronchial tree. 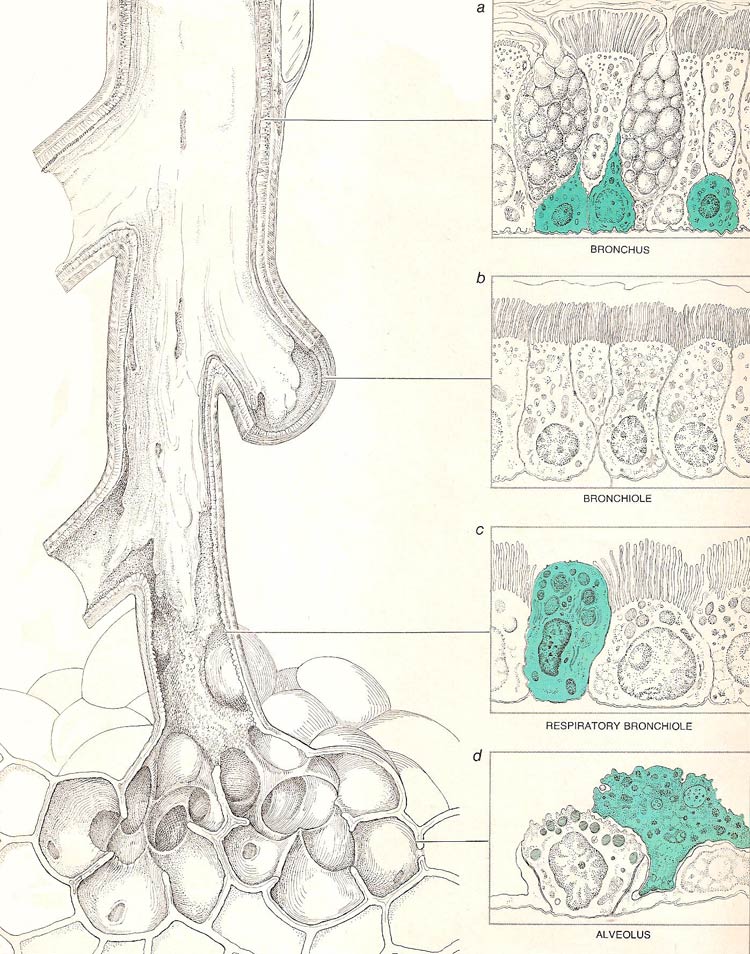 Cells of different kinds comprise the lining of various parts of the lung. Both in the trachea and in the bronchi (a) the lining consists of a deep array. Short basal cells (color) are most prominent at the bottom. Rising between them are (left to right) a brush cell, which lacks surface cilia, a goblet cell, which secretes mucus, and a ciliated cell, columnar in form. More of these same cells continue the sequence. The lining of the smaller bronchi and the bronchioles (b) consist of only a single layer of cells; they are ciliated and remain columnar in form. At the boundary between bronchiole and alveolar duct (c) ciliated cells, columnar in form elsewhere, are shortened and more cube-shaped. Among them appear Clara cells (color) with an unknown function. Lining the individual alveolus (d) are scavenger cells (color), the attenuated surface cells known Type I and the more prominent cells of Type II. Organelles (light color) found within Type II cells may be sites where surface-active lipids the cells secrets are stored.

The bronchial tree is the branching system of trachea, bronchi, bronchioles, alveolar ducts, alveolar sacs, and alveoli that conducts air from the windpipe into the lungs. In the mediastinum, at the level of the fifth thoracic vertebra, the trachea divides into the right and left primary bronchi. The bronchi branch into smaller and smaller passageways until they terminate in tiny air sacs called alveoli.

The cartilage and mucous membrane of the primary bronchi are similar to that in the trachea. As the branching continues through the bronchial tree, the amount of hyaline cartilage in the walls decreases until it is absent in the smallest bronchioles. As the cartilage decreases, the amount of smooth muscle increases. The mucous membrane also undergoes a transition from ciliated pseudostratified columnar epithelium to simple cuboidal epithelium to simple squamous epithelium.