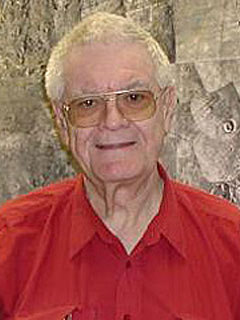 Alastair Cameron was a Canadian astrophysicist and space scientist who was among the first to develop the theory of stellar nucleosynthesis – the production of chemical elements in stars – and to advocate that the formation of the Moon resulted from a giant impact on the early Earth by an object at least the size of Mars.

Cameron began his career as an undergraduate at the University of Manitoba, Canada, during the final years of World War II. Later he earned a doctorate in nuclear physics at the University of Saskatchewan. He spent 26 years of his academic career at Harvard University beginning in 1973 as associate director for planetary sciences at the Harvard-Smithsonian Center for Astrophysics and, later, as head of Harvard's astronomy department. He was named professor emeritus at Harvard University and appointed the Donald H. Menzel Research Professor of Astrophysics in 1999, a position he held at the time of his death together with that of senior research scientist in the Lunar and Planetary Laboratory at The University of Arizona.

Cameron was among the first to be hired by NASA's newly established Goddard Institute for Space Studies in 1961 and took a leading role in organizing scientific conferences. In 1963, he edited an influential anthology on the subject of interstellar communication (see CETI).1 In the introduction, he wrote:

[T]here may be millions of societies more advanced than ourselves in our galaxy alone. If we can now take the next step and communicate with some of these societies, then we can expect to obtain an enormous enrichment of all phases of our sciences and arts. Perhaps we shall also receive valuable lessons in the techniques of stable world government.

Cameron's own research led him to dispute Otto Struve's claim that stars which spin slowly, like the Sun, do so because they have transferred angular momentum to a planetary system. Instead, Cameron proposed that virtually all single stars, irrespective of their rotational speed, have planets, and that loss of angular momentum occurs when young stars eject matter into space in the form of vigorous stellar winds.