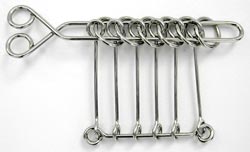 Chinese rings are one of the oldest known mechanical puzzles. The object is to remove all n rings from a horizontal loop of stiff wire, and/or put them back on. On the first move it is possible to take up to two rings off the left end of the wire. One or both of those can then be slipped through the wire loop (from top to bottom). If both are removed then the fourth ring can be slipped over the end. If just one of the first two is removed, then the next step is to slip the third ring over the end. Subsequently, rings must be put back on to the wire loop in order to remove other rings, and this procedure is repeated over and over again. In general, the minimum number of moves needed is (2n+1 - 2)/3 if n is even and (2n+1 - 1)/3 if n is odd. For example, with seven rings the solution takes 85 moves. Most of the solution is easy, as each move normally involves going forward or back to the previous state. The key to a correct solution is the first step: if n is even, you must remove two rings; if n is odd, you must remove only one. The solution is similar to that of the Tower of Hanoi. In fact, Edouard Lucas, who invented the Tower of Hanoi, gave an elegant solution to the Chinese rings that uses binary arithmetic.

Stewart Cullin, the noted 19th-century ethnologist, relates that the puzzle was invented by the famous Chinese general Chu-ko Liang (AD 181–234), in the second century, as a present to his wife so that, in trying to solve it, she would have something to do while he was away at the wars. However, this is anecdotal and its origins remain obscure. The earliest reference to it in Europe may be in about 1500 in the form of Problem 107 of the manuscript De Viribus Quantitatis by Luca Pacioli in which the description appears: "Do cavare et mettere una strenghetta salda in al quanti anelli saldi, difficil caso" (Remove and put a little bar joined in some joined rings, difficult case). It was also mentioned by Girolamo Cardano in the 1550 edition of his book De subtililate from which comes the name Cardan's rings, and was treated at length in mathematical terms by John Wallis in about 1685. By the end of the seventh century, it had become popular in many European countries. French peasants used it to lock chests and called it baguenaudier, or "time-waster."