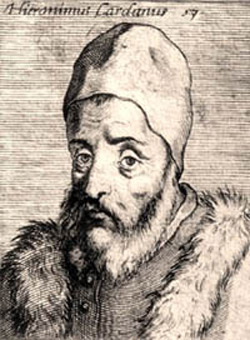 Girolamo Cardano was a celebrated Italian Renaissance mathematician, physician, astrologer, and gambler, whose writings on the use of negative numbers are the earliest known in Europe. As a physician, he gave one of the first clinical descriptions of typhoid fever. The illegitimate child of a mathematically gifted lawyer who was a friend of Leonardo da Vinci, he entered the University of Pavia in 1520 and later studied medicine at Padua. His eccentric and confrontational style earned him few friends and he had trouble finding work. Eventually, he won reputation as a physician and his services were highly valued at the courts.

Today, Cardano is mostly remembered for his achievements in algebra. He published the solutions to the cubic and quartic equations in his book Ars magna (1545). The solution to the cubic was communicated to him by Niccolo Tartaglia (who later claimed that Cardano had sworn not to reveal it, and became embroiled with Cardano in a decade-long fight), and the quartic was solved by Cardano's student Lodovico Ferrari. Both were acknowledged in the foreword of the book. Cardano was notoriously short of money and kept himself afloat by being an accomplished gambler and chess player. A book by him about games of chance, Liber de ludo aleae, written in the 1560s but published posthumously in 1663, contains the first systematic treatment of probability, as well as a section on effective cheating methods. Cardano invented several mechanical devices including the combination lock, the Cardano suspension (consisting of three concentric circles that allow a supported compass to rotate freely), and the Cardan shaft, which allows the transmission of rotary motion at various angles and is used in vehicles to this day. He made several contributions to hydrodynamics and claimed that perpetual motion is impossible, except in celestial bodies. He published two encyclopedias of natural science that contain a wide variety of inventions, facts, and occult superstitions.

Cardano led a beleaguered life. His elder and favorite son was executed in 1560 after he confessed to having poisoned his mercenary, cuckolding wife. Cardano's daughter was allegedly a prostitute who died from syphilis, prompting him to write a treatise about the disease. His younger son was a gambler who stole money from him. And Cardano himself was accused of heresy in 1570 because he computed the horoscope of Jesus Christ. Apparently, his own son contributed to the prosecution. Cardano was arrested and had to spend several months in prison, then was forced to abjure and had to give up his professorship. He moved to Rome, received a lifetime annuity from Pope Gregory XIII, and finished his not-uneventful autobiography. He died on the day he had (supposedly) astrologically predicted.