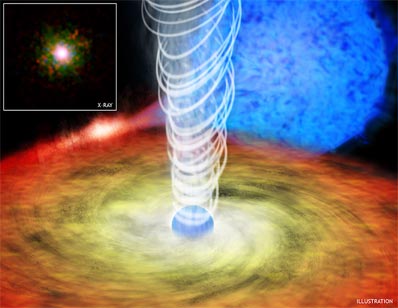 Circinus X-1 is an X-ray binary in which a neutron star, slightly more massive than the Sun, is in orbit around a normal main sequence star. Circinus X-1 (Cir X-1) lies about 20,000 light-years away in the constellation Circinus.

Although Cir X-1 was discovered in 1971, many of its properties remained mysterious because it lies in the galactic plane where obscuring dust and gas block its effective study at many wavelengths. X-rays, however, shine through the interstellar medium relatively unaffected and reveal that the collapsed component is surrounded by a fast-spinning, multi-million-degree accretion disk, composed of matter looted from the second star.

In 2002, the Chandra X-ray Observatory detected, for the first time in X-rays, a stellar fingerprint known as a P Cygni profile – the distinctive spectral signature of a powerful stellar wind. Chandra's data reveal that the radiation and rotational forces in the Cir X-1 disk are blasting some of the inward-spiraling gas back into space at speeds of up to 7.2 million km/h. Cir X-1's high-velocity wind gives this small two-star system a striking similarity tobroad-absorption-line quasars – a type of active galaxy with an accretion disk circling its black hole plus very powerful winds created when radiation pushes material off the disk and into space. Astronomers hope that X-ray P Cygni profiles will turn out to be a fairly commonly in X-ray binaries containing neutron stars and black holes and thus help to shed new light on these objects.