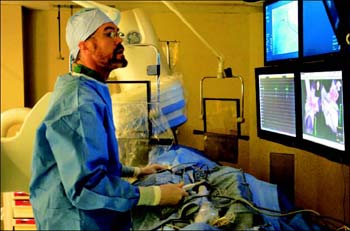 Catheter ablation is a medical procedure used to treat some types of arrhythmia. An arrhythmia is a problem with the speed or rhythm of the heartbeat.

During catheter ablation, a long, thin, flexible tube is put into a blood vessel in the patient's arm, groin (upper thigh), or neck. This tube is called an ablation catheter. It's then guided to the heart through the blood vessel. A special machine sends energy through the catheter to the heart. This energy finds and destroys small areas of heart tissue where abnormal heartbeats may cause an arrhythmia to start.

The process repeats with each new heartbeat. A problem with any part of this process can cause an arrhythmia.

Catheter ablation is one of several treatments for arrhythmia. A doctor may recommend it if:

Though few, catheter ablation has risks. These include bleeding, infection, and pain where the catheter is inserted. More serious problems include blood clots and puncture of the heart.

Cardiologists (doctors who specialize in treating people with heart problems) sometimes perform ablation through open-heart surgery. But this method is not as common as catheter ablation, which doesn't require surgery to open the chest cavity.

Catheter ablation alone doesn't always restore a normal heart rate and rhythm. Other treatments may need to be used as well. Also, some people who have the procedure may need to have it done again. This can happen when the first procedure doesn't fully correct the problem.

A doctor may recommend catheter ablation if the patient:

Before having catheter ablation, a patient should discuss with his/her doctor:

Some people go home the same day as the procedure. Others need to stay overnight for one or more days. Driving after the procedure may not be safe.

Catheter ablation is done in a hospital. Doctors who do this procedure have special training in cardiac electrophysiology (the electrical system of the heart) and ablation (destruction) of diseased heart tissue.

Once the patient is drowsy, an area on the patient's arm, groin (upper thigh), or neck is numbed. This is where the ablation catheter (a long, thin, flexible tube) will be inserted into a blood vessel. A needle is used to make a small hole through the skin into the blood vessel. A tapered tube called a sheath is put through this hole.

Special X-ray movies are taken of the guide wire and the catheter as they are moved into the heart. The movies help the doctor see where to place the tip of the catheter.

Electrodes at the end of the catheter are used to stimulate the heart and record its electrical activity. This helps establish where abnormal heartbeats are starting in your heart.


What the patient may feel

The patient may sleep on and off during the procedure and will generally not feel anything except for:

The procedure lasts 3 to 6 hours. When the procedure is done, the ablation catheter will be pulled back and taken out along with the sheath and guide wire. The opening left in the blood vessel is closed and bandaged. Nurses apply pressure to this site to help prevent major bleeding and to help the site begin to heal.

After the procedure, the patient is moved to a special care unit where he/she lies still for 4 to 6 hours of recovery. Lying still prevents bleeding at the site where the catheter was inserted.

While the patient is in the special care unit, he/she is connected to special devices that measure the heart's electrical activity and blood pressure. Nurses check these monitors continuously and also check to make sure that there's no bleeding at the catheter insertion site.

Before the patient's, he/she is informed by the doctor:

Driving after the procedure may not be safe. The patient will be informed if they needs to arrange for someone to drive them home.

Recovery from catheter ablation is usually quick. The patient may feel stiff and achy from lying still for 4 to 6 hours after the procedure. In addition, a small bruise may form at the site where the ablation catheter was inserted. The area may feel sore or tender for about a week. Most people are able to return to normal activity in a few days.

The doctor will give information about signs and symptoms to watch for. The patient should tell the doctor if he/she has problems such as:

Though few, catheter ablation does have risks. Possible problems are: