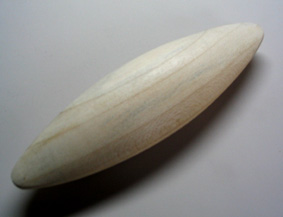 A celt, also known as a rattleback, is a simple ancient toy that behaves in a very counterintuitive way. When spun one way about its vertical axis, the celt spins for a long time. When spun the other way, however, a wobble quickly sets in that halts the rotation and then, incredibly, reverses it. In his 1986 paper1 on the subject the British physicist Hermann Bondi wrote: "Many people, even trained scientists, find it hard to understand that the behavior of the toy doesn't violate the principle of conservation of angular momentum."

The celt's remarkable antics stem from three factors: a curved base that has two different radii – one long radius for the lengthwise curve and one shorter radius for the tighter curve across the width; axes of symmetry that are skewed slightly from the principal axes of inertia; and a different distribution of mass about each of the two horizontal axes of inertia. To understand how the celt can switch direction halfway through its performance, think of the frictional force that acts at the point of contact between the celt and the surface. One component of the friction creates a torque (twisting force) that tends to rotate the celt about its vertical axis. The point of contact is moving all the time and the torque changes. If the inertial and symmetrical axes coincided, the average torque over a single oscillation would be zero. But for the celt, there's a net torque in one direction, which reverses the angular momentum.