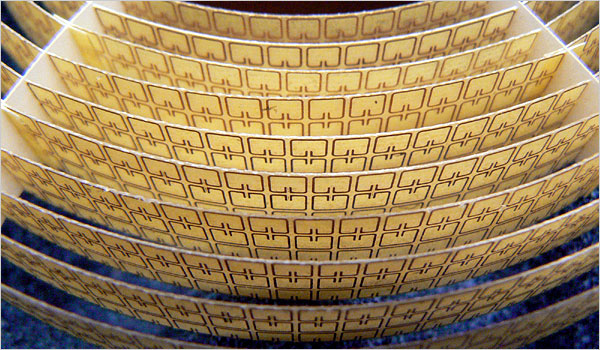 Duke University prototype cloaking device. Duke researchers built a simplified version of their cloaking device out of copper rings and wires patterned onto fiberglass sheets and demonstrated that it successfully diverted microwaves. 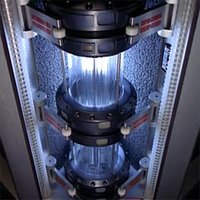 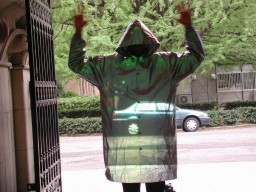 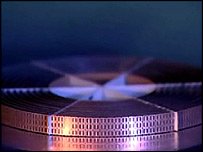 A cloaking device is a form of stealth technology familiar in science fiction, most notably in the Star Trek universe, but that is now becoming possible, to a limited extent, in the real world (see below). Humans have long dreamed of having the power of invisibility. In Greek mythology, Perseus possessed a cap that let him wink out of view. In more recent times, H. G. Wells penned "The Invisible Man" about a scientist who learned to change the refractive index of his own body.

In the Star Trek universe, a cloaking device renders a starship or other facility so equipped, invisible to the eye and to most sensor systems. Cloaking is said to require so much power that a vessel can't use weapons (or, in early episodes, also warp drive) unless it first de-cloaks. This proviso provides ample opportunity for interesting plot developments. However, the stricture is violated in several Star Trek episodes. For example, in the original series episode "Face of the Enemy" a Romulan warbird fires while cloaked. By the 24th century, as depicted in Star Trek: The Next Generation (TNG), a method has been found to detect cloaked ships: by searching for neutrinos that leak from the cloak. Apparently, even the best cloaking system can't prevent all of these elusive particles from escaping from sources such as the ship's warp core. Somewhat implausibly, only the Romulans and Klingons used cloaking in the original series.

The absence of the technology aboard Federation ships was explained in TNG by way of the Treaty of Algeron, in which the Federation relinquished the right to develop or use cloaking devices. However, an illegal Federation cloaking device turns up aboard the USS Pegasus in the TNG episode "Pegasus". The Pegasus device is particularly advanced in that it allows passage through solid matter – so-called "interphase cloaking" (see photo at upper right).

In the Star Trek universe, the cloaking device supposedly generates a "spatial distortion" which causes light and sensor rays to travel around the ship, so that nothing is reflected from its surface. Such an in intense distortion – equivalent to an enormous mass concentration, such as that in the vicinity of a black hole or neutron star – would certainly crush the ship and crew unless additional measures were taken to counteract the effect inside the distortion.

In the real world, there is great interest in the development of optical stealth technology which is effectively a form of cloaking. Indeed, this technology has already begun to break into the public sector, notably in Japan.

In 2006, mathematicians Nicolae Nicorovici and Graeme Milton proposed a kind of cloaking that would exploit a resonance with light waves (G. W. Milton and N. A. Nicorovici, "On the cloaking effects associated with anomalous localized resonance," Proceedings of the Royal Society of London, to appear, (2006). Called anomalous localized resonance, it would involve placing certain objects close to a material called a superlens so that they would appear to vanish. The effect is analogous to a tuning fork being placed next to a wine glass causing the wine glass to ring with the same frequency.

Nicorovici and Milton explain in their paper how an illuminated speck of dust would scatter light at frequencies that induce a strong, finely tuned resonance in a cloaking material placed very close by. The resonance would effectively cancel out the light reflecting from the speck of dust, rendering the dust particle invisible.

One way to construct a cloaking device is to use a superlens, made of recently discovered materials that force light to behave in unusual ways. If the speck of dust is close enough it induces a very aggressive response in the cloaking material which essentially acts back on the speck of dust and forces it to stop shining. Even though light is hitting the speck of dust, scattering of the light is prevented by the cloak which is in close proximity. The authors of the paper argue that the cloak needn't just work with a speck of dust, but could also apply to larger objects. However, the authors have so far only done the maths to verify that the concept could work.

Also in 2006, a team of British and American scientists gave the first practical demonstration of a cloaking device at Duke University, North Carolina. The device mostly hid a small copper cylinder from microwaves. It works by deflecting the microwaves around the object and restoring them on the other side, as if they had passed through empty space.

The microwave cloak consists of 10 fiberglass rings covered with copper elements (see illustrations at right and top). This is classed as a metamaterial – an artificial composite that can be engineered to produce a desired change in the direction of electromagnetic waves. The precise variations in the shape of copper elements patterned on to the ring surfaces determines their properties.

In the experiment, the scientists first measured microwaves traveling across a plane of view with no obstacles. Then they placed a copper cylinder in the same plane and measured the disturbance, or scattering, in the microwaves. Finally, the researchers placed the invisibility cloak over the copper cylinder. Although the cloak did not completely iron out the disturbance, it greatly reduced the microwaves being blocked or deflected.

In principle, the same mechanism could be used to cloak objects from visible light. But this would pose a challenge, as nano-scale engineering would be needed to make the cloak.