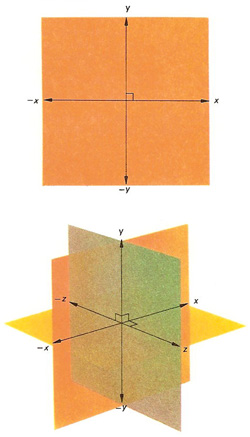 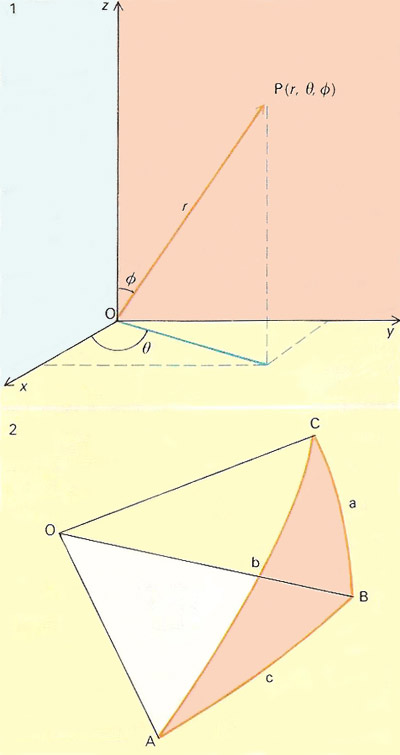 A coordinate is one of a set of variables that specifies the location of a point in space. If the coordinates are distances measured along perpendicular axes, they are known as Cartesian coordinates. There are many different systems of coordinates in mathematics, astronomy, and science, some of which are described below.

Cartesian coordinates are an ordered set of real numbers that defines the position of a point in terms of its projection on to mutually perpendicular number lines.

Celestial coordinates are any system of coordinates that can be used to give the position of an object, such as a star, on the celestial sphere. A particular system is defined by the chosen point of observation (the origin), the plane of reference, and whether the coordinates are spherical or rectangular.

Equatorial coordinates are the most common system of celestial coordinates used by astronomers. Because it takes as a reference plane the plane of the celestial equator (an extension into space of Earth's equatorial plane), it is the sky equivalent of longitude and latitude. Celestial longitude is called right ascension (RA) and is measured eastward along the celestial equator, in hours, minutes, and seconds of sidereal time, or, alternatively, in degrees, starting from 0h (or 0°) at the vernal equinox. Celestial latitude is known as declination (Dec) and is the angular distance of a body north or south of the celestial equator, reckoned positive when north and negative when south. Sometimes, instead of RA and Dec, hour angle and polar distance are used.

In 1958, because of increased precision in determining the location of the galactic center, based on observations of the 21-centimeter line, a new system of galactic coordinates was adopted with the origin at the galactic center in Sagittarius at RA 17h 42.4m, Dec -28° 55' (epoch 1950). The new system is designated by a superior Roman numeral II (i.e., bII, lII) and the old system by a superior Roman numeral I.

Heliographic coordinates are the latitude and longitude of a feature on the Sun's surface. Heliographic latitude is an object's angular distance north or south of the solar equator; heliographic longitude can be measured east or west of the central solar meridian, or given in terms of the Carrington rotation number.

Horizontal coordinates are a system of celestial coordinates that uses the observer's horizon as a reference plane and the observer's latitude and longitude as a point of origin. The position of a star, or other object, on the celestial sphere, at any given time, is determined by its altitude, the angular distance of the object above the horizon, and its azimuth, the angular distance of the object angle measured east from north and parallel to the horizon.

A polar equation is one that uses polar coordinates.

Spherical coordinates are a system for specifying positions in terms of angles on a sphere, such as the celestial sphere or the surface of a planet or large moon (Fig 2). In spherical coordinates, a point P in space is located by its position relative to three mutually perpendicular axes (the x-, y-, and z-axes) in terms of (1) its distance r from the origin, O, (2) the angle (θ) between the x-axis and the projection of OP onto the x-y plane, and (3) the angle (φ) between OP and the z-axis. The coordinates of P are thus expressed in the form (r, θ, φ). See also analytic geometry.

Topocentric coordinates is a system of celestial coordinates with its origin at a specific point on Earth's surface. Usually, the difference in the position of an object in the sky measured using topocentric and geocentric (Earth-centered) coordinates is very small because most celestial objects are so far away. The Moon's position, however, can vary as much as 2° depending on where on Earth it is measured from, and, within the past few years, an observatory in Australia missed spotting an asteroid that passed close to Earth because it used geocentric rather than topocentric positions.