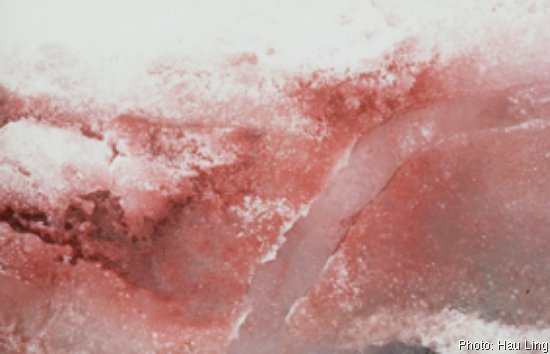 Red algae (rhodophyta) on ice, Newcomb Bay, Antarctica. Snow algae, like these, grow in semi-permanent to permanent snow or ice in the alpine or polar regions of the world and have optimum growth temperatures are generally below 10°C. They have successfully adapted to their harsh environment through the development of a number of features which include pigments, polyols (sugar alcohols, e.g., glycerine), sugars and lipids, mucilage sheaths, motile stages and spore formation. Image: Australian Antarctic Division.

Cryobiology is the study of biological activity at low temperatures. Cryobiology can trace its roots back to the early 1660s when Henry Power, a Fellow of the Royal Society of London, froze vinegar eel-worms (tiny nematode worms that feed on the organisms causing fermentation in vinegar) overnight to find that they were still alive when thawed the next day.

In its modern form, cryobiology is interested in everything from finding ways to improve the resistance of crops to cold weather to the ability of organisms to survive in frigid extraterrestrial environments. A branch of cryobiology known as cryonics seeks to preserve human organs (including the brain) for resuscitation at some future date. A long-standing theme of science fiction has been the possibility of putting human astronauts in deep freeze (see sleeper ship) on long space journeys.