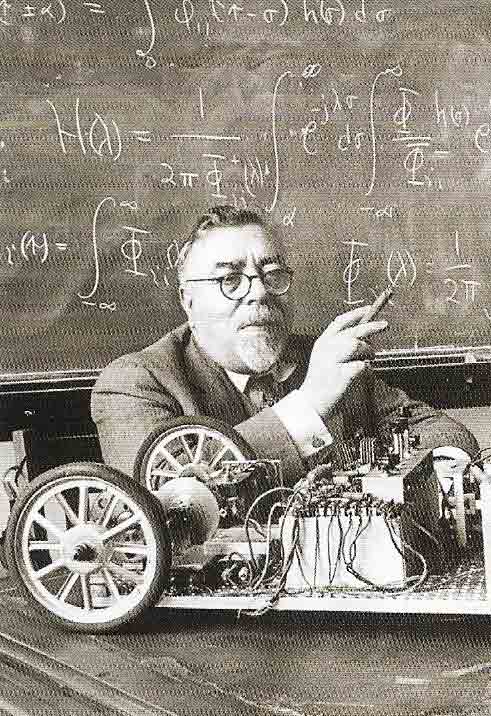 Nobert Wiener, founder of cybernetics, in a Massachusetts Institute of Technology classroom in 1949. Winer was a child prodigy who earned his first degree at the age of 14.

Named from the Greek kybernetes, meaning 'to steer' or 'to navigate,' the mathematical word of cybernetics developed at a time when huge strides were being made in computing and telecommunications. The theory was developed gradually throughout the 1940s by mathematicians such as Julian Bigelow (1930–2003), Alan Turing (the "father of artificial intelligence"), and notably Norbert Wiener, who published his book Cybernetics, or Control and Communication in the Animal and the Machine in 1948. In the book, Wiener defined cybernetics as the study of the structures, and possibilities interment in a system that exists within its own "closed loop," where any act within the system affects its own environment and produces information that allows they system to alter or modify its behavior. In other words, cybernetics is about systems that produce feedback, and how that feedback is used to improve the ability of that system to achieve its goal.

For example, imagine someone trying to steer a boat along a given course. The wind and tide will both act on the boat with the effect of driving it off course. However, by looking where he or she is going and using this feedback to steer the boat either left or right, the person steering is able to keep the boat (or system) on course. The term "system" can refer to biological systems in humans and animals, and Lao to technological systems and systems such as the environment or the economy. Cybernetics touches on numerous academic disciplines, including electrical engineering, mathematics, biology, neurophysiology, anthropology, and psychology, and has been applied to fields such business management and organisational learning. Although cybernetics is often thought to be linked to Artificial Intelligence, the two are distinct from one another.

An important area of cybernetics is concerned with linking the working of the brain and nervous system with the functioning of computers and automated feedback devices.