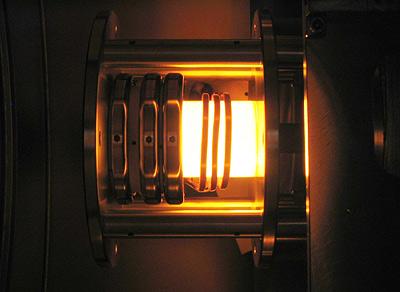 The dual-stage 4-grid (DS4G) thruster is a new design for a highly efficient ion engine designed and built at the Australian National University and sold to the European Space Agency (ESA) which laid down some basic conceptual requirements. According to the results of tests, announced in January 2006, DS4G achieved an exhaust velocity of 210 km/s – more than 10 times faster than possible with the ion engines used on Deep Space 1 and SMART-1, and four times faster than the latest prototype ion engine designs.

Traditional ion engines use three closely separated perforated grids containing thousands of millimeter-sized holes attached to a chamber containing a reservoir of charged particles. These systems effectively extract and accelerate the ions in one stage, which because of physical constraints limits the extraction potential applied between the first and second grids to 5 000 V. The DS4G ion engine solves this limitation by effectively decoupling the acceleration from the extraction process into a two-stage system. This allows for independent throttling of the exhaust velocity but more importantly allows very high accelerating fields to be applied to the second stage without adversely affecting the extraction field. The test model has reached total acceleration potentials as high as 30,000 V, resulting in the high exhaust velocity noted above.

"Using a similar amount of propellant as SMART-1, a future spacecraft using our new engine design wouldn't just reach the Moon, it would be able to leave the Solar System entirely," according to an ESA press release. Once developed into full flight ready devices, these engines will propel spacecraft to the outermost planets, the newly discovered planetoids beyond Pluto and further into interstellar space, all with-in the working lifetime of a mission scientist.

Closer to home, these supercharged ion engines could figure prominently in the human exploration of space. With an adequate supply of electrical power, a small cluster of larger, high power versions of the new engine design would provide enough thrust to propel a crewed spacecraft to Mars and back.