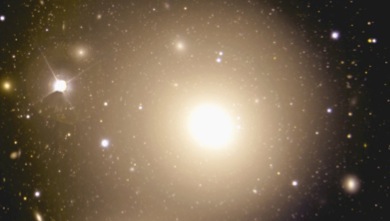 The supergiant elliptical NGC 3311 – the centrally dominant cD galaxy in the Hydra I cluster. The normal giant elliptical, NGC 3309 at the bottom of the picture, is also in the cluster.

A D galaxy is a luminous giant elliptical galaxy typically found near the center of a cluster of galaxies. D galaxies are similar in appearance to ordinary ellipticals, but their brightness declines more slowly with distance from the center, making them look as if they have diffuse halos (the "D" stands for "diffuse".)

A cD galaxy is even bigger and brighter and is found centrally located in a rich cluster of galaxies, i.e. tnhose containing large numbers of galaxies that are relatively close together. cD galaxies are believed to have grown so large through galaxy mergers. Indeed, several cD galaxies are observed to have multiple galactic nuclei, as if they are still in the process of cannibalizing smaller systems (see galaxy cannibalism).