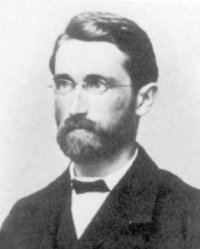 Richard Dedekind was a German mathematician whose most important contribution was the discovery of what became known as the Dedekind cut. He realized that every real number r divides the rational numbers into two subsets: those greater than r and those less than r. Dedekind's brilliant idea was to represent the real numbers by such divisions of the rationals. He also provided important support for Georg Cantor's set theory, which was highly controversial at the time.

Beginning in 1850, Dedekind studied mathematics at the University of Göttingen at a time when Carl Gauss, Bernhard Risemann, and Peter Dirichlet were teaching there. He received his doctorate in 1852 under Gauss' supervision. After a brief spell at Zurich he spent the rest of his life as a professor at the Brunswick Polytechnikum.

Mention has already been made of his redefinition of irrational numbers in terms of Dedekind cuts. His work on mathematical induction, including the definition of finite and infinite sets, and in number theory, particularly in algebraic number fields, is also of major importance.

Among Dedekind's other notable contributions to mathematics were his editions of the collected works of Dirichlet, Gauss, and Riemann. His study of Dirichlet's work led to his own study of algebraic number fields, as well as to his introduction of ideals. In a joint paper with Heinrich Weber published in 1882, he applies his theory of ideals to the theory of Riemann surfaces. This gave powerful results such as a purely algebraic proof of the Riemann-Roch theorem.

Dedekind's work was quickly accepted, partly because of the clarity with which he presented his ideas. Dedekind's notion of an ideal was taken up and extended by Hilbert and then later by Emmy Noether. This led to the unique factorization of integers into powers of primes to be generalised to ideals in other rings.

In 1879 Dedekind published Über die Theorie der ganzen algebraischen Zahlen, which was again to have a large influence on the foundations of mathematics. In the book Dedekind presented a logical theory of number and of complete induction, presented his principal conception of the essence of arithmetic, and dealt with the role of the complete system of real numbers in geometry in the problem of the continuity of space.