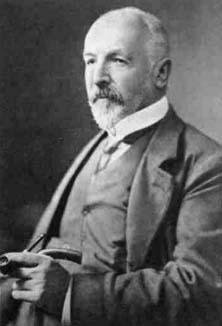 Georg Cantor was a Russian-born German mathematician who founded set theory and introduced the concept of transfinite numbers. His shocking and counterintuitive ideas about infinity drew widespread criticism before being accepted as a cornerstone of modern mathematical theory.

Cantor was 11 when his family moved from St. Petersburg to Germany. Despite attempts to push him into the more lucrative field of engineering, he eventually won his father's approval to study math at the Polytechnic of Zurich. The following year, 1863, his father died and Cantor switched to the University of Berlin where he studied under some of the greats of the day, including Karl Weierstrass and Leopold Kronecker. After receiving his doctorate in 1867, he had trouble finding a good job and was forced to accept a position as an unpaid lecturer and later as an assistant professor at the backwater University of Halle. In 1872, he achieved his first breakthrough – and a promotion – by proving that if a function is continuous (in other words, its graph is smooth) throughout an interval, it can be represented by a unique trigonometric series. This work, suggested to him by a colleague, Heinrich Heine, was crucial because it led Cantor to think about the relations between points, represented by real numbers, that make up an unbroken line – the so-called continuum. Cantor realized that irrational numbers can be represented as infinite sequences of rational numbers, so that they can be understood as geometric points on the real-number line, just as rational numbers can. He was now in uncharted territory and at odds with mathematical orthodoxy, which frowned on the idea of actual infinity; however, he found like-minded friends in Richard Dedekind and, later, Gösta Mittag-Leffler.

In 1873–1874 Cantor proved that the rational numbers could be paired off, one by one, with the natural numbers and were therefore countable, but that there was no such one-to-one correspondence with the real numbers. He then went on to show, incredibly, that there are exactly the same number of points on a short line as there are on an indefinitely long line, or on a plane, or in any mathematical space of higher dimensions. On this, he wrote to Dedekind: "I see it, but I don't believe it!"

By 1883, Cantor had abandoned his earlier reticence about dealing with irrationals only as sequences of rationals and started to think in terms of a new type of number – the transfinites. The sets of natural numbers and of real numbers were, he reasoned, just two elements of a series of different kinds of infinity. This dramatic extension of the number system to allow for legitimate mathematics of the infinite, was violently opposed. Henri Poincaré said that Cantor's theory of infinite sets would be regarded by future generations as "a disease from which one has recovered." Kronecker went further and did all he could to ridicule Cantor's ideas, suppress publication of his results, and block Cantor's ambition of gaining a position at the prestigious University of Berlin. In the spring of 1884 Cantor suffered the first of several attacks of depression, exacerbated if not induced by the negative reaction of his contemporaries. In between these attacks, he published further results but was increasingly troubled by his failure to prove the continuum hypothesis – his belief that the order of infinity of the real numbers came next after that of the natural numbers. Although his later years were spent in and out of sanatoria, he lived long enough to see his ideas on set theory vindicated and be described by David Hilbert as "the finest product of mathematical genius and one of the supreme achievements of purely intellectual human activity."

Cantor dust, also known as the Cantor set, is possibly the first pure fractal ever found. It was discovered by Cantor around 1872.