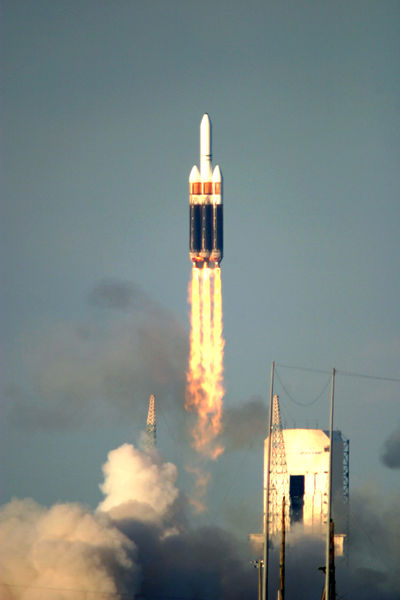 The Delta IV Heavy is the most powerful member of the Delta family of launch vehicles manufactured by Boeing. The 70-m (230-ft) tall Delta IV Heavy (Delta 9250H) features three core boosters strapped side-by-side and a stretched 5-m composite payload fairing. Each Pratt and Whitney Rocketdyne-built RS-68 engine burns about one tonne of propellant every second, producing 2,891 kN (650,000 lb) of thrust at liftoff. The two strap-on boosters are separated earlier in the flight than the center booster.

The Delta IV Heavy can put 13 tonnes into a geostationary transfer orbit (GTO) and 23 tons into a low-Earth orbit, a capability not far short of the Space Shuttle. Indeed Boeing had proposed that an upgraded version of the vehicle be used as a manned launcher when the Shuttle was retired.

The Delta IV Heavy carries only military, not commercial, payloads. Its first launch – a test flight – took place on December 21, 2004. This was followed on November 10, 2007, by second launch which placed a 2.3-ton Defense Support Program (DSP) in GTO. On January 21, 2011, a Delta IV Heavy became the largest rocket ever to the launch from the US West Coast (Vandenberg Air Force Base) carrying an National Reconnaissance Office (NRO) payload. Flying the Delta from the West Coast allows the largest reconnaissance satellites to be put into polar orbits.