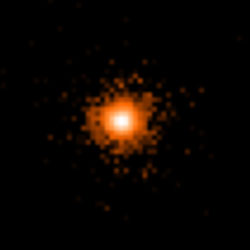 Deneb Kaitos (Beta Ceti) is the brightest star in the constellation Cetus. It stands out in an otherwise barren area south of the Square of Pegasus and northeast of Fomalhaut. Its Arabic name means the "whale's tail," while an alternative name "Diphda" (or "Dipda"), also Arabic, refers to the "first frog," where Formalhaut was the "second frog." A giant K star (almost type G), Deneb Kaitos is one of the brightest X-ray stars in the solar neighborhood. Its high-energy radiation, 2,000 times more powerful than that of the Sun, comes from a magnetically heated corona. It is believed that the X-ray activity is related to the star's advanced stage of evolution called core helium burning.