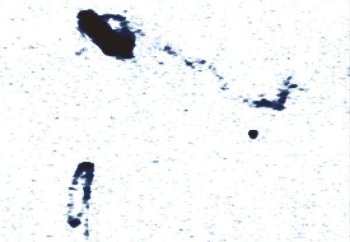 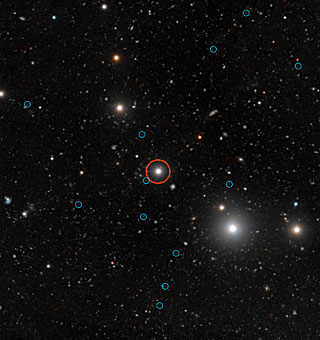 A region of sky around the quasar HE0109-3518, labeled with a red circle. The quasars high-energy radiation makes 12 nearby dark galaxies (blue circles) glow. Credit: ESO, Digitized Sky Survey 2 and S. Cantalupo (UCSC).

The term "dark galaxy" may be used to refer two different types of object:

A dark matter galaxy composed almost exclusively of dark matter and in which virtually no star formation has taken place.

An object in the early universe composed largely of hydrogen gas that hasn't yet consolidated into stars. In 2012, astronomers published evidence gathered using the Very Large Telescope for this type of dark galaxy in the vicinity of a quasar.

It's thought that dark matter galaxies should be very common, particularly since theories of large-scale structure work much better if the existence of these dark matter galaxies is assumed. Also, surveys have revealed fewer bright galaxies in the universe than expected, suggesting that many galaxies, for reasons yet to be understood, fail to trigger star birth.

In 2005 astronomers in the United Kingdom announced the discovery of what may a dark matter galaxy, VIRGOHI21, lying only about 50 million light-years away in the Virgo Cluster.[1] Radio observations of the rotation of hydrogen gas in VIRGOHI21 revealed there must be at least 100 times as much dark matter as hydrogen in the galaxy and that its total mass is about one-tenth that of the Milky Way.

According to a counter theory, VIRGOHI21 may simply be the result of a close encounter between two other galaxies – NGC 4254, which lies nearby, and NGC 4262, which ago hurtled past NGC 4254 at 900 km/s millions of years. A prominent arm of stars stretching out from NGC 4254 and bending toward VIRGOHI21 lends some support to this idea. However, if VIRGOHI21 did originate in material pulled out of NGC 4254 then it ought to contain stars in addition to its several hundred million solar masses of hydrogen. In 2007, observations of a patch of sky 50,000 by 50,000 light-years across, centered on the hydrogen cloud's position, found only 119 red giant stars, which is only the number expected in a typical region of the same size in intergalactic space. One possibility is that NGC 4254's long stellar arm has been drawn out by the gravity of VIRGOHI21 itself.

If VIRGOHI21 really is a dark galaxy it poses astronomers with a challenge. Its ratio of dark matter to normal matter appears to be at least 10 times greater than the ratio found in other galaxies.

Ten billion light-years away – very much further than VIRGOHI21 – lies a dwarf galaxy whose presence is only known because of a discrepancy in a gravitational lens effect caused by a large, distant elliptical galaxy. The lens created by the big galaxy is slightly different than what computer modeling predicts, leading to the conclusion that an invisible companion – a dark galaxy, with a mass of about 200 million solar masses – lies at the periphery of the larger system.

In the present-day cosmos, dwarf galaxies are often found at the periphery of larger galaxies. The Milky Way has a couple of dozen such satellites. But there seem to be many fewer dwarf galaxies around than theories of galaxy formation predict. One way to explain this is that exist but can't be seen because they're made of dark matter.

The other type of object called a dark galaxy is a cloud of material, made mostly of hydrogen gas, in a pre-stellar stellar state in the early universe. Such dark galaxies are thought to have been very common in the first billion years or so after the Big Bang. The first direct observational evidence for their existence came in 2012, when astronomers published data collected using the Very Large Telescope.[2] It revealed the presence of a dozen objects fluorescing because of the light falling on them from a nearby quasar. The astronomers who did this research estimated that the mass of the gas in each object is about a billion times that of the Sun, which, theory suggests, would be typical for a gas-rich, low-mass galaxy in the early universe.