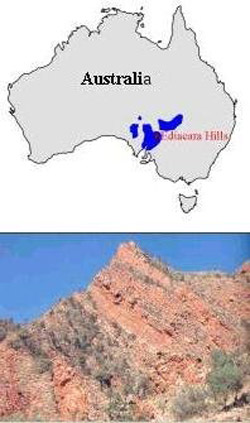 The Ediacaran period, also known as the Vendian period, was a geological period that began at the end of the last ice age of the Snowball Earth. It lasted from 640 million years ago to the start of the Cambrian period 543 million years ago. During it, the first multicellular life-forms, including sponges, jellyfish, and worms appeared. The Ediacaran is named after the Ediacara Hills, just west of the Flinders Ranges in South Australia, where peculiar fossils were found in the 1940s. Later it was realized that examples had been reported earlier on other continents.

The Ediacaran is relevant to the search for extraterrestrial life because conditions similar to Snowball Earth might exist elsewhere in the solar system. Beneath the icy crust of Jupiter's moon Europa, an ocean has been suggested, perhaps making complex life feasible there.