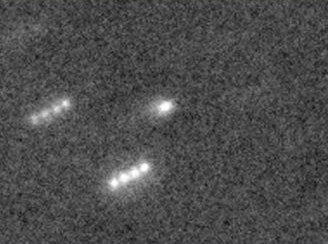 The photo by which Leonid Elenin discovered the comet (center) now named after him.

Comet Elenin is named after Leonid Elenin, a Russian astronomer, who discovered it on December 10, 2010, remotely using the ISON-NM robotic observatory near Mayhill, New Mexico. At the time of the discovery, the comet was about 647 million km (401 million miles) from Earth – a bit closer to us than Jupiter.


Where did comet Elenin come from?

Like all long-period comets, comet Elenin has an enormously stretched-out orbit that, at its most remote, takes it over 1,000 times further from the Sun than is the Earth. This places its aphelion (furthest point from the Sun) in the inner Oort Cloud. The Oort Cloud is the most distant material realm of the solar system, extending from slightly less than 1,000 AU (150 billion km) from the Sun all the way out to about 1.5 light-years, or more than a third of the distance to the nearest star. The Oort Cloud can be thought of as a vast reservoir of frozen cometary nuclei. Occasionally, slight gravitational disturbances from nearby stars or passing clouds of interstellar matter nudge some of these frozen nuclei onto different orbits, so that instead of always orbiting very far from the Sun in roughly circular orbits, they are thrown inward on highly elliptical orbits that, at perihelion, bring them relatively close to the Sun, so that they develop long, showy tails and are readily visible from Earth. At some point, the object we now know as comet Elenin was thrown out of its old orbit in the Oort Cloud onto the path it now follows, bringing it close to the Sun every 11 or 12 thousand years.

After its passage around the Sun, in the fall of 2011, comet Elenin will disappeared once again into the cold, dark depths of the solar system and become invisible to us for many more millennia.

Comet Elenin has a nucleus, or hard part, that appears to be quite small as cometary nuclei go. A typical cometary nucleus is about 10 km in diameter whereas that of Elenin was estimated by its discoverer to be 3–4 km across. Also, the nucleus of a comet is not made of solid rock, but is a much less dense affair resembling packed icy dirt (in fact, cometary nuclei are often described as "dirty snowballs"). Surrounding the nucleus, as the comet approaches the Sun and material begins to vaporize from its surface, is a much bigger region – typically about 100,000 km across – called the coma, composed entirely of widely-spaced dust particles and gas. Some people confuse the size of the nucleus and coma, which may make a comet seem more imposing and threatening than in reality it is.

As for what comet Elenin will look like from Earth when at its closest or brightest, that is hard to say. Although astronomers know exactly what path Elenin will follow, what it will look like in the night sky is more unpredictable. It depends on the exact nature of the comet and how its surface materials behave as they are heated up by the warning rays of the Sun. Given its fairly small size, Elenin is not likely to be a particularly bright comet. It may come as a disappointment to many people given all the publicity that it has received, especially with regard to with Doomsday scenarios.


Did comet Elenin pose a threat to us?

The simple, and slightly boring answer, is "no". Elenin is a roughly 5km-wide chunk of ice and rock that will miss us by the comfortably wide margin of 35 million kilometers, which is more than 90 times further away than the Moon. Almost every month, asteroids whiz by us at much closer distances. Not only will Elenin not hit the Earth but its gravitational influence on us will be less than that of any car driving down the highway. It represents absolutely no threat at all.

So why are late-night talk-radio stations and Internet forums so busy with chatter about what Elenin might do to us? Partly it's because people are entertained by such stories, and there are always folk happy to masquerade as specialists who are willing to pander to our desire to be titillated. Tales of Armageddon and upcoming catastrophes are ten-a-penny. As far as Elenin goes, part of the confusion has to do with the size of the object. As mentioned above, there's a big difference between the size of the coma of a comet and the size of nucleus. Elenin is not tens of thousands of km across. Only its coma is this big, and its coma is nothing but luminous gas and dust. It will also develop a tail, hundreds of thousands of km long, but the material in the tail is evenly more finely dispersed and would pass for a good vacuum here on Earth.

Only if Elenin's nucleus were on a direct collision course with Earth would it pose a threat. As it is, it will coast by far, far beyond the distance of the Moon. Nothing can alter its course, which is now locked in place by the laws of physics.

Could Elenin come under the gravitational influence of a large body in the solar system which deflects its path toward Earth? If there were another body in the solar system massive enough to deflect significantly the path of Elenin at this late stage we would know about it. It would have to be of planetary mass, and be presently located somewhere within the orbit of Jupiter. Even if such a body were completely dark or invisible, its presence would be known because of its gravitational effects on the other planets. Again, the laws of physics rule against such a possibility. The simple fact is that comet Elenin's trajectory is locked in place and will bring it no closer than 90 times the distance of the Moon this time around.