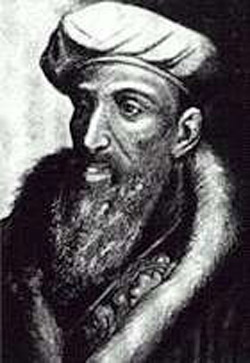 Bartolomeo Eustachio was an Italian anatomist, who was physician-in-ordinary to the popes and professor of medicine in Rome, where he died in 1574. Aiming at first to vindicate Galen against Vesalius and others, he brought a new level of skill and accuracy to dissection.

Eustachio was the first to describe the teeth in detail, including their basic composition of enamel and dentin. He published the first accounts of the adrenal gland and thoracic duct. The Eustachian tube of the ear and the Eustachian valve, at the junction of the inferior vena cava and right atrium, are named for him. These and other discovereies are recorded in his Opuscula Anatomica (Venice, 1564); his Tabulae Anatomicae were first edited by Lancisi in 1714.