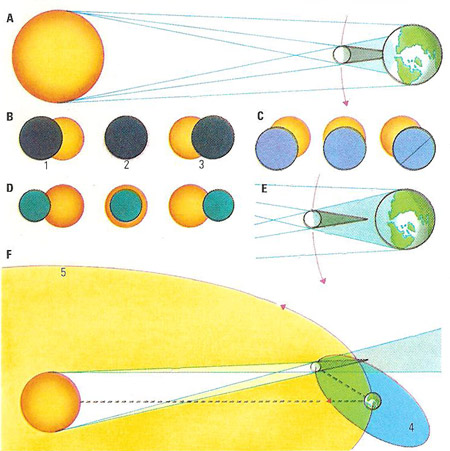 In a total solar eclipse (A) the main cone of shadow or umbra reaches the Earth's surface while to either side of it, in the partial shadow or penumbra, a partial eclipse is seen. The Moon and Sun (B) approach totality (1), arrive at totality (2), and leave totality (3). C shows a partial eclipse that is not total anywhere on Earth. An annular eclipse (D) occurs when the umbra stops short of the Earth. F shows how the tilt of the Moon's (4) to the plane of the Earth's orbit (5) prevents an eclipse from occurring every month of the year.

An eclipse is the total or partial concealment of one celestial body by another, a phenomenon seen in solar eclipses, lunar eclipses, and eclipsing binary stars.

If a solar eclipse happens when the Moon is at apogee (furthest point from Earth), its apparent size is less than the Sun's, and an annular, or ring, eclipse results, with the Sun appearing as a bright ring around the dark Moon. If the Earth and the Moon's orbits were in the same plane, solar and lunar eclipses would be monthly, occurring at new and full moons. But because the Moon's orbit is at an angle to the Earth's, eclipses are possible only when the Moon crosses Earth's orbital plane and is in line with the Earth and the Sun. These conditions happen seven times a year at the most.

To early people's eclipses, especially of the Sun, were awe-inspiring events. It isn't surprising that the knowledge that eclipses can be predicted added greatly to the authority of its discoverers, the astronomer-priests of Chaldea (Mesopotamia). Today solar eclipses enable astronomers to make studies that are not normally possible, such as checking Einstein's theory of relativity.

Compare with occultation and transit.