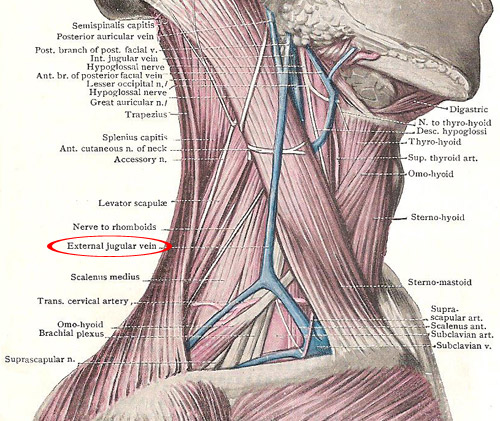 Triangles of the neck seen from the side, showing external jugular vein.

The external jugular vein is a fairly large vein that lies in the superficial fascia for most of its course, and is conspicuous in the neck.

As the external jugular vein lies on the sternomastoid, anterior to the great auricular nerve, it is deep to the platysma and crosses the anterior cutaneous nerve of the neck. In the posterior triangle it receives the transverse cervical, suprascapular, and anterior jugular veins: and it lies superficial to the lower roots of the brachial plexus and to the third part of the subclavian artery.

Immediately above its termination the vein is provided with a valve. As it pierces the deep fascia, its wall is closely connected with the margin of the opening through which it passes. Consequently, when the fascia is stretched the lumen of the vein is widened, and, if the vein is divided at that point the walls of the lower portion do not collapse and air is apt to be sucked into it when the breath is drawn – an accident which may be fatal.