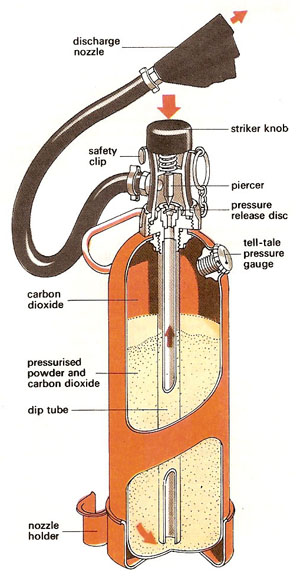 Multipurpose dry powder fire extinguisher. When the striker knock is struck, carbon dioxide gas in the main cylinder escapes through the nozzle, carrying the charge of fire-killing dry powder to the fire. The powder works by physically restricting the oxygen supply to the flame and by chemically and physically combining with the hot combustible materials supporting the flame.

A fire extinguisher is a portable appliance for putting out small fires. Extinguishers work either by cooling or by depriving the fire of oxygen (as typified by the simplest, a bucket of water or bucket of sand), and most do both. The now-obsolete soda-acid extinguisher contains a sodium bicarbonate solution and a small, stoppered bottle of sulfuric acid; depression of a plunger shatters the bottle, mixing the chemicals so that carbon dioxide (CO2) gas is generated, forcing the water out of the nozzle.

The safer and more reliable modern water extinguisher utilizes a pressure charge of carbon dioxide gas. When the charge is ruptured, the expanding gas immediately expels a powerful jet or spray of water. Foam extinguishers employ a foaming agent (usually animal protein or certain detergents) and an aerating agent: they are effective against oil files, as they float on the surface. Carbon dioxide extinguishers provide a smothering blanket of CO2; and dry chemical extinguishers provide a powder of mainly sodium bicarbonate, from which the fire's heat generates CO2.