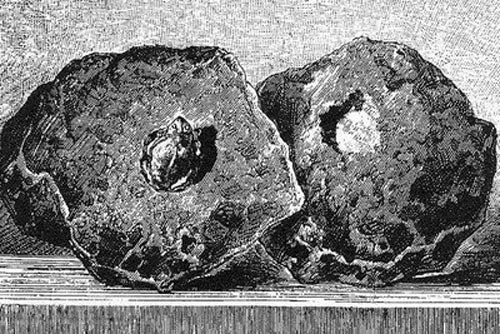 Lithograph of a toad found inside a rock.

Not long ago, a sapphire miner was cracking open rocks at a site just outside Adelaide, South Australia, when, suddenly, extraordinarily, out of the middle of one of the rocks hopped a frog. After a few minutes, the frog died.

Stories like this have been reported on and off for many years. During work on the Liverpool docks in 1829, one of the granite blocks making up the underwater footing was cut up to make new steps. In the process, a small toad was set free. Again, it expired within minutes of liberation.

Such a phenomenon seems to make a mockery of both reason and everyday experience. How on earth could an amphibian grow to maturity and live encapsulated within a lump of rock? Commonsense tells us two things: first that frogs and toads can't develop from inanimate stone, and second that they can't beam Star Trek-like through solid matter and materialize inside it. The discovery of an incarcerated amphibian mightn't seem like a matter of huge importance. When all's said and done, a stone is just a stone, and a frog is just a frog. But for living frog to be found sealed inside a stone is more than a little puzzling: it's disquieting and potentially sensational, because it hints at the possibility there may be something in the world that lies beyond our comprehension. And then other questions spring to mind. Is our ignorance of this phenomenon merely personal, or is it shared by society as a whole? And if no one has a satisfactory explanation, can we be sure that such an explanation, in terms of known causes and effects, can even be found? A frog in a stone doesn't seem much. But as long as it remains inexplicable it is a threat, however small, to the conception of the universe as a coherent and well-ordered place.

Nowadays, anyone finding a frog inside a stone has a number of options. She could contact her local museum, zoo, or university zoology department. She could check her city's main library for records of any similar finds. She could post a message on an Internet forum. Probably within hours, she'd have so much information, including a welter of anecdotal material, about amphibians in rocks that she wouldn't know where to begin.

But in the past it wasn't nearly so easy to share or obtain information connected with a strange incident or event. Getting from one place to another, tens or hundreds of miles away, was problematic. Sending messages, other than by word of mouth o hand-delivered correspondence, was impossible. The only realistic option to the average person who had an unusual experience or made a curious find in the course of their daily life would be talk it over with family and friends. And once that collective commonsense had failed to come to terms with how a living animal could turn up inside a chunk of solid rock most people would have to deal with the problem in the best way they could. They might contrive an explanation– probably a very strange and eccentric one – to satisfy their private need to make some sense of the matter. Or, if no explanation suggested itself, they might allow the whole incident to drift into the nebulous never-never land between fact and fantasy.

Left to its own devices, commonsense might never have solved the riddle of rock-entombed animals. We might still be guessing, still be telling tales and wondering to ourselves what this strange anomaly from nature's aberrant fringe could possibly mean. Yet the resources of science aren't so easily exhausted, as shown by William Buckland, a naturalist who lived in Oxford over a century and a half ago. Buckland had heard plenty of tales about frogs and toads being set free from inside stones. But he wasn't content just to collect anecdotes, listen to third-hand gossip or speculate idly on the basis of say-so. In the spirit of Galileo, he chose to experiment, to try to bring the mystery out into the open. And so he embarked on what now seems like an incredibly eccentric piece of research. He placed twelve live toads in cavities that he'd made in sandstone rocks, twelve more in cavities in limestone rocks, and then sealed the entrances with slate and clay. Exactly one year later, he prized open the rocks, looked inside – and made a remarkable discovery. Although every one of the toads in the impervious sandstone was dead, most of the others were alive and two had actually put on weight. With the help of a microscope, Buckland quickly found out why. Inside some of the limestone cavities, he discovered traces of minute insects. Evidently, it was upon these that the surviving toads had kept themselves adequately nourished.

So part of the mystery had been cleared up. But there was still the puzzling question of how. without human intervention, frogs and toads managed to get inside rocks in the first place. A clue to help solve this came from a hollow flint nodule found at Lewes, in Sussex, England, in 1899. When the nodule was broken open it yielded an entire mummified toad. Beforehand, the rock had seemed completely sealed. But after the discovery of the toad, a close examination showed that in fact the rock harbored the fragile remains of a vase-like fossil sponge. This provided a narrow passageway from the outside world to one end of the nodule. Presumably, the fossil tunnel had allowed the entry of a small toadlet which, in damp conditions, could have survived contentedly by hopping in and out of its new-found home to feed. At some point, the toad must have grown too large to get out, its shelter became its prison, and its continued survival depended on insects being drawn into its dank and odorous surroundings.

It would be surprising if anyone, in the history of the human race, had actually seen an animal enter a hollow stone and become imprisoned. Nevertheless it now seems clear how this biological equivalent of a ship-in-a-bottle can come about. In the majority of cases where frogs and toads are found inside rocks the most reasonable explanation is that there are small fissures through which the creatures entered while still young. Even tiny channels could allow a single egg to float in. Then, if there were a larger space at the end of the channel, the animal could grow and mature by feeding on the meager rations which trickled in from the outside world.

In other instances, there might be a different explanation. The frog found by the sapphire miner, for instance, turned out upon examination at the state museum in New South Wales to be of the water-holding kind known as Petodactylidae. These are native to the arid regions of Australia and, between periods of rain, they burrow into mud, often for as long as two years or more, covering themselves with a membrane to reduce water loss. In fact, although it seems disgusting to our squeamish tastes, they were often used by aborigines during droughts as handy source of liquid refreshment. The "rock" found by the sapphire miner was in reality a mud-ball that had been baked cement-hard during a prolonged dry spell.

As to why imprisoned amphibians should die so quickly when set free, this isn't so difficult to surmise. The sudden exposure to fresh air and light after a lifetime spent inside a damp, dark hole would probably be enough to kill the animal through shock alone.