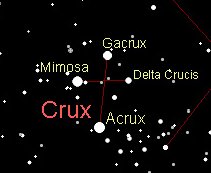 At first, Gacrux looks double, with a faint, nearly seventh magnitude A-type companion about 2' away, but this is just a line-of-sight coincidence. Though usually taken to be single, the fact that Gacrux is a mild barium star hints that its surface may have been contaminated by the stellar wind from a companion that evolved first and is now a dim white dwarf. Certainly, Gacrux is variable, by a few tenths of a magnitude. Though little is known of the nature of the variability, it has been classified as a semi-regular variable. It is also blowing a fairly strong, and noticeably variable wind. Its evolutionary status is uncertain. It may already be fusing helium in its core; if so it is in the process of becoming a second-ascent giant, brightening into the realm of the giant stars for the second time – a speculation reinforced by its variability.