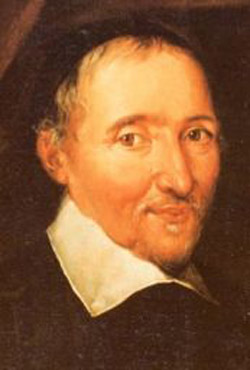 Pierre Gassendi was a French philosopher and mathematician important for his role in tipping the balance away from the old and toward the new science. A friend and ally of Kepler and Galileo, he attacked the prevalent Aristotelianism and supported atomism. He also made a number of important astronomical observations, and named the aurora borealis (see aurora).

Early on Gassendi studied, and later taught, philosophy at Aix. He favored empirical methods to the prevailing scholastic philosophy and launched an attack on the Aristotelian view of the world in his Exercitationes paradoxicae adversus Aristoteleos, published in Grenoble in 1624. In the same year he was appointed prévôt of the cathedral at Digne, an office that enabled him to devote all his energy to research in astronomy and other natural sciences. From 1628 he spent several years travelling through Holland, Flanders, and France, until in 1645 he was appointed professor of mathematics in the Collège Royal de France, at Paris, where he died.

During his stay in the Low Countries Gassendi argued against the mystical opinions of Robert Fludd, and wrote a treatise on parhelia (sun dogs), besides other astronomical papers. Eleven years later he criticized the new system of philosophy propounded by Decartes in a work entitled Objectiones ad Meditationes Cartesii. While at Paris Gassendi wrote his principal philosophical works, De Vita Epicuri (1647); a commentary on Diogenes Laertius' tenth book , De Vita, Moribus, et Placitis Epicuri (1649); and in the same year the Syntagma Philosophiae Epicureae, which contains a complete view of the system of Epicurus. His Institutio Astronomica (1647) is a clear and connected representation of the state of science in his day; in his Tychonis Brahaei, Nicolai Copernici, Georgii Puerbachii, et Joannis Regiomontani Vitae (Paris, 1654) he gives not only a masterly account of the lives of these men, but likewise a complete history of astronomy down to his time. His collected works were published by Montmort and Sorbière (6 volumes, Lyons, 1658), and by Averrani (6 volumes, Florence, 1728).