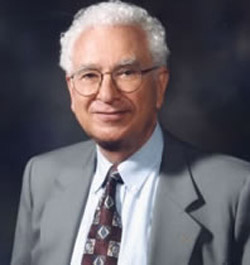 Murray Gell-Mann was an American theoretical physicist who won the 1969 Nobel Prize in Physics for his application of group theory to elementary particles, which led to the prediction of the quark as the basic constituent of the baryon and meson. His theory also predicted the existence of a baryon called the omega-minus particle, which was subsequently discovered in 1964. Gell-Mann had also introduced in 1953 the concept of strangeness to explain the longevity of certain particles.