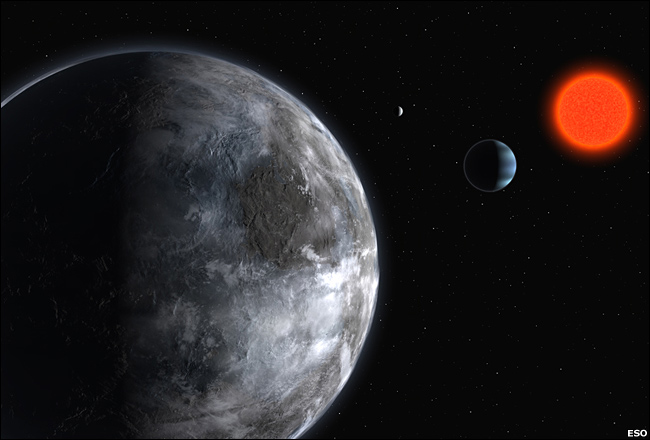 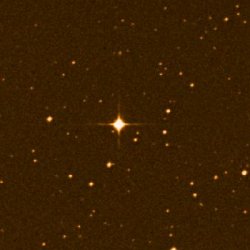 Gliese 581 is a nearby red dwarf in the constellation of Libra around which have been found six exoplanets, including one (Gliese 581e) that is the lightest discovered to date (only about 1.9 times the mass of Earth) and another (Gliese 581g) that is first low-mass planet found to orbit in the middle of its star's habitable zone and which could therefore support permanent liquid water on its surface. Another planet, Gliese 581d, appears to orbit at the outer edge of the habitable zone.

The discovery of Gliese 581g was announced on September 29, 2010. This is the first planet to be found orbiting more or less in the middle of its star's habitable zone, and is therefore an excellent candidate for supporting life as we know it. Gliese 581g has a 37-day orbit and a mass between 3.1 and 4.3 times that of Earth. Its relatively low mass means it is almost certainly a rocky world.

At the time its discovery was announced, on April 21, 2009, Gliese 581e had the lowest published mass of any known exoplanet, apart from a very small world orbiting a pulsar. Also, it is suspected that the exoplanet MOA-2007-BLG-192-L b, discovered by the method known as microlensing, might weigh as little as 1.4 Earth masses, though this has yet to be confirmed.

The low mass of Gliese 581e means that it is almost certainly rocky like Earth. However, it orbits too closely to its parent star for there to be a realistic chance of it harboring any surface water.

Earlier estimates put the orbital period of planet d at 83 days, placing it outside Gliese 581's habitable zone. However, this value was revised downward to 66 days in an announcement made at the same time as that of the discovery of planet e. The new figure gives planet d an orbit lying entirely within the outer boundary of the habitable zone. The mass of 581d – 7 times that of Earth – suggests that it is not made entirely of rock, nor can it be a large gas giant like Jupiter or Saturn. Instead it may have a composition similar to that of Uranus or Neptune, with a rocky core surrounded by a deep mantle of water, ammonia, and methane. Much of this water, it has been suggested, may be in a liquid state, possibly making 581d the first of a new class of ocean planets.