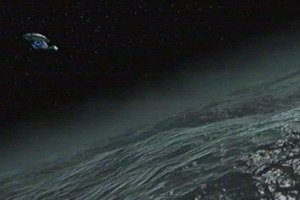 An ocean planet is a hypothetical planet that is completely covered by ocean. Earth itself is two-thirds covered by water, yet Earth's water content is only about one part in 4400. It seems very likely that planets with a higher water content, orbiting close enough to their stars for the water to exist in a liquid state, would be entirely submerged. It has been suggested that the outermost known planet (d) of the Gliese 581 system might be an ocean planet. Another candidate is the super-Earth GJ 1214b, which is about 19 times as large as Earth by volume but only 6.6 times as massive. Such an object could be composed mostly of water with just a small rocky core. Calculations show that GJ 1214b must also have an atmosphere, although its closeness to its central star (a red dwarf) probably makes it too hot to be habitable.

The term "ocean world" entered the scientific lexicon in 2003 when Marc Kuchner of the Exoplanets and Stellar Astrophysics Laboratory at the NASA/Goddard Space Flight Center, proposed how such worlds might come about.1 Six months later another paper, by Alain Léger of the Université Paris-Sud, France, dealt with the same subject.2

Basically an ocean planet would begin to form far away from its central star, acquiring large amounts of water-ice. Its composition by weight might be about 50% water-ice, 50% rock, which is similar to the makeup of Pluto, the icy moons of the outer Solar System, and comets. Providing it didn't become any more than about 10 times the mass of the Earth, its gravity pull would be too weak to draw in significant amounts of hydrogen and helium. Hence it wouldn't develop into a gas giant like Jupiter or Saturn. If the infant rock-ice planet then migrated to a smaller orbit around the central star, its water would melt and turn into a global ocean with an average depth as great as 100 km.

All the rocky matter on an ocean planet would sink to the planet's center, forming a dense core not unlike Earth's. But whereas the Earth has a thick mantle of magma, ocean planets would have a mantle of exotic ice. The pressure at the bottom of the ocean would be at least 10 million atmospheres, which is sufficient to cause water to solidify.

Depending how close it orbited to its star, an ocean planet might have a surface that was icy, liquid, or some combination of the two. If it got too close, its ocean might turn into a dense envelope of supercritical water: an even mix of vapor and suspended droplets at hundreds of degrees Celsius. It would effectively be a sauna planet.

It has been suggested that a number of ocean planets might be detected by the COROT spacecraft. In an article,3 Franck Selsis and colleagues described how COROT and ground-based observations can be combined to estimate the density of extrasolar planets and thus tell the difference between an ocean world and a terrestrial-type rocky world. COROT would only be able to detect ocean worlds that are a lot closer to their stars than even Mercury is to the Sun. However, the Kepler satellite, scheduled for launch in 2008, will be able to detect such planets as far out as the habitable zone of some stars.

Ocean planets would clearly be of interest to astrobiologists given that they have an abundant supply of a substance crucial to life as we know it.

An artificial ocean world features in the Star Trek Voyager episode "Thirty Days" (see illustration above). The Monean home world is held together by a containment field that is gradually failing.

The novel Noise by Hal Clement is centered on the ocean world Kainui, which, along with its twin uninhabited ocean planet, Kaihapa, circles a binary star system. Kainui's Maori-descended colonists live a nomadic existence, traveling about by boat or on one of the planet's anchorless floating cities.