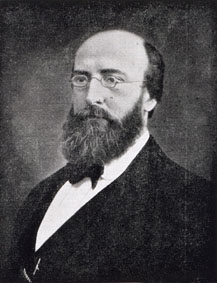 Benjamin Gould was an American astronomer who founded the Astronomical Journal and later established Argentina's National Observatory. Gould graduated from Harvard in 1844, then, having studied for a year at Berlin, he obtained his PhD from Göttingen University in 1848 under Karl Gauss. On his return to the United States he served as head of the longitude department of the US Coast Survey from 1852 to 1867, pioneering the use of the telegraph in measuring longitude. At the same time he founded the Astronomical Journal (1849) and edited it until 1861 when its publication was halted by the Civil War. He was also connected with the Dudley Observatory, Albany, from 1855 and served as its director briefly in 1858 before being forced to get out of town the following year. After his traumatic expulsion from Albany he handled his father's business for some time. He set up a private observatory in Cambridge, Massachusetts, financed by his wife, and in 1862 produced a star catalogue that brought together measurements made at various observatories. He left for Argentina in 1870. The 15 years spent in Cordoba were by far the most productive of Gould's career. He established the Argentine National Observatory and began the first major survey of the southern skies. The Observatory's first survey of naked-eye stars was published as the Uranometria Argentina (1879). This was followed by the fuller recording, published in 1884, of 73,160 stars from 23°S to 80°S and in 1886 by the publication of the Catálago General (General Catalogue) containing the more accurate recording of 32,448 stellar coordinates. This important work was continued by Gould's successor, Juan Thome. An extended band of young stars, cloud, and dust that forms a spur off one of the spiral arms of our Galaxy, revealed by the southern surveys, was subsequently named the Gould Belt. In 1885 Gould returned to Massachusetts where he restarted the Astronomical Journal and worked on the 1,000 photographic plates of star clusters he brought back with him from Cordoba.