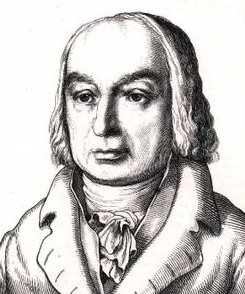 Franz Gruithuisen was a German physician-turned-astronomer, among the most prolific of his age in terms of published output, and professor of astronomy at Munich from 1826, who argued energetically in favor of advanced life on the Moon and inner planets.

On the subject of a lunar civilization he supported Schröter's similarly exuberant claims and wrote such papers as "Discovery of Many Distinct Traces of Lunar Inhabitants, Especially of One of Their Colossal Buildings" (1824), claiming that he had seen roads, cities, and a star-shaped "temple." Such extraordinary inferences, from what otherwise may have been sound telescopic observations, made him the object of ridicule by fellow astronomers, even those who appeared generally sympathetic to the idea of lunar life, such as Gauss, von Littrow, and Olbers. Gruithuisen's over-active imagination also led him to suggest that the ashen light on Venus was due to "festivals of fire given by the Venusians ... celebrated either to correspond to changes in government or to religious periods." A small crater on the Moon is named after him.