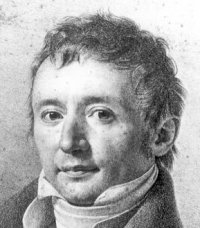 Joseph Littrow was an Austrian astronomer and Director of the Vienna Observatory who is supposed to have devised a method for signaling our presence to the inhabitants of either the Moon or Mars (see communication, with the Moon and planets). The scheme often attributed to him called for canals to be dug in geometric shapes in the Sahara, filled with water, topped with kerosene and set alight. This story, however, may be apocryphal, despite the fact that von Littrow supported pluralism and possibly even the idea that the Moon was inhabited.