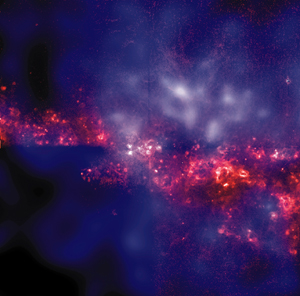 Using the Chandra X-ray Observatory and the Hubble Space Telescope, astronomers have mapped the giant halo of hot gas that extends above the disk of a spiral galaxy, much like the Milky Way. The observations of galaxy NGC 4631 indicate there must be a close correlation between the outflows of hot gas seen in X-rays and the galaxy's magnetic field revealed by radio emission. The gas radiates at almost 3 million degrees and extends some 25,000 light-years from the galactic plane. Image source: NASA.

The galactic magnetic field is a weak and largely disordered magnetic field, with a strength of about 5 × 10-10 tesla, that pervades the disk of the Milky Way Galaxy and controls the alignment of interstellar dust particles. Similar fields exist in other disk galaxies. The magnetic fields of elliptical galaxies are more difficult to investigate because of the lack of interstellar matter.